Why did you choose medicine?

Well for me, my only view of medicine was through my mother. My mom is a nurse at Grady and she pretty much has been for most of my life. Just being able to see her work endlessly 6 days a week made me want something better for her. I also worked at Grady for 3 years as a sitter (basically babysitting psychiatric patients) before I started med school and I saw so many deficits in the nurse-doctor relationship. It was disheartening to see the work that the nurses put in caring for multiple patients with all type of ailments for 12 hours a day, while doctors would at times treat them as if they were incompetent. Most importantly, I want to better the doctor-patient relationship. Medicine is becoming so much of just prescribing patients medication until they don’t feel pain anymore. The number of re-admissions are steadily rising and a big reason is the huge lack of communication between doctors and patients. So many patients are sent home without knowing how to properly take their medications and are re-admitted because of lack of education. I am only one person, but I want to be at least one bright spot in medicine that can help the rebuild the trust and cohesiveness between all the different components of healthcare and most importantly the patients.

You were class president your first year. How did you juggle that?

Being class president my first year in medical school was no cake walk. The added pressure of being the leader and voice of your class while also trying to figure out how this whole med school thing works was basically like trying to solve a rubiks cube blindfolded. And being youngest in a class of 80 people didn’t make it any easier seeing that most people in the class were 24+ with many above the age of 30.

I initially intended on making major moves to allow my class to have the best first year experience possible, but the first few months turned out to be full of conflict management. So many ADULTS were coming to me complaining about people being in clicks and how fellow classmates don’t speak in elevators. You’d think that being in med school, people wouldn’t even trip over stuff like that, but you’d be surprised. To kill all the pettiness, I created a conflict management committee that dealt with any issues anyone had. All in all, it wasn’t too hard to balance the president and student act. Before I started studying, I would dedicate 45 minutes to all my administrative stuff and then study for the rest of the day. I didn’t re-run for presidency second year because I personally felt like I could be more influential in other associations and I also wanted to be a bigger part of my interest group 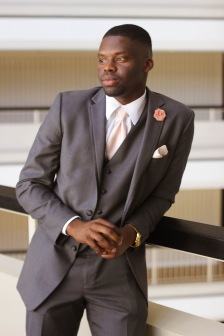 When you feel like quitting, what’s your motivation to keep going?

Whenever I felt like quitting, I would just ask myself if the tomorrow me would regret me quitting right now. If the answer was yes (which it usually was), I would do something to clear my head whether its going for a little run or just saying a short prayer asking for strength. Pain is always temporary, but grades are permanent. I chose sleep the night before a test over just grinding it out and studying and I almost failed. After that day, I told myself never again would I choose sleep over putting in work.

What’s the best piece of advice you’ve received on your journey?

Some of the best advice I have received is the fact that I am no longer just doing this for myself. The seeds I sew today will grow to be the fruit that generations to come will eat from. This advice helped me on those long nights when I felt too tired to study or just wanted to sleep instead of reading another chapter.